Well I see that it has been just over five months since I last posted on here. Not that I haven't been doing stuff since February - my March blog post on Green-History sometimes-the-present-takes-priority gives some of the reasons for the silence. In addition a fair amount of reading, including Goldsmith's "The Way[1]" and Jeremy Lent's "The Patterning Instinct[2]" - both of which I will right short reviews/reactions/commentaries on on here dreckly - and also a constant stream of stimulating ideas from other sources, plus some personal action and involvement in other public actions.

But I'm back here so I'll start with a short roundup of the five months.

Back in late February I was somewhat involved with XR locally and started to set up the idea of a cycle ride to London for the Spring Rebellion events in the week before Easter. That started with me pinging the other three previous Climate Vision cyclists, Euan, Ricky, & Ewan to see if they were interested and all were immediately up for it. 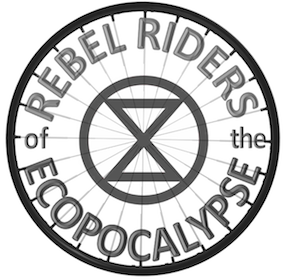 From there it grew as I got involved in planning a route that took in our home towns (Falmouth, Launceston, Barnstaple, and Bruton) and had us arrive in London on the Sunday evening. Then I wanted to have some decent evening events this time, so talking with other XR groups along the way to set up various receptions and invite people to join the ride - which they did.

Suddenly it had become a bit of an organisation mountain, with accommodation to coordinate across 20+ riders plus meeting points and times for various day riders and events - I really really now appreciate the tremendous work of The Big Ride for Palestine team in putting together the 2018 Coventry to London ride.

So we became the Rebel Riders of the Ecopocalypse (SW Chapter) and what started as four mates going on a ride together blossomed somewhat.

Anyway the story of the ride itself is on my cycle blog https://xr-rebelriders.uk/sw/page/3/

Before leaving I managed to finish Teddy Goldsmith's 1992 book "The Way" (the 1996 revised edition) which is a tour-de-force summation of his thinking and an logical progression from first principles to a deep ecology world view that sees humanity as a part of nature.

Sitting waiting on the bookshelf was my Christmas present to myself - I had got impatient with waiting for it to come out in paperback so I had finally bit the bullet and ordered the hardback - Jeremy Lent's 2017 book "The Patterning Instinct".

That kept me quiet on the reading front until mid-June what with one thing and another (including some fiction, but I don't seem to be reading so many books this year). It turned out to be another magnum opus and an excellent companion work to The Way as it approached the same subject - humanity's relationship with the world - from a slightly different perspective and ended up in very much the same place. Reviews to follow.

Meanwhile in the 'real' world the political circus makes increasingly mad attempts to shore up the status quo - thanks here to Craig Murray, Media Lens, John Greer, Dimitry Orlov (sometimes), Jonathan Cook, George Monbiot (occasionally) and a host of other sane voices. If you don't see any mainstream media aside from a glimpse of headlines on a news-stand or a "news" propaganda bulletin on Radio 3 then it is easy to see just how influenced many real people's opinions are by the mainstream media worldview, which essentially presents a justification for a shitty status quo.

In the real real world a late frost in April did some damage and going away to London and then for a 10 day roadtrip to Scotland didn't help, but some food is now coming in. No plums this year, but I did get apricots, and spuds and onions and peas are ok. Currently 'enjoying' a glut of cucumbers.

One final comment; my militant refusal to continue to engage with facebook after my return from XR in London (I had to create an account to manage the Rebel Riders stuff in the end) has left me somewhat disengaged from XR as my local group (and many other parts) primarily exist on social media - what part of "act as if the truth is real" do these people not understand? So it goes.

More before too long I think.

In every voice, in every ban, the mind forged manacles I hear
William Blake, London in Songs of Experience 1789